Give me a ticket for an aeroplane. (image: chicago-fire.com)

I envision myself on a tapas bar crawl, fully loaded with delicious food and wine. I take in the beautiful sight of Puerta del Sol – Madrid’s most famous square – while I breathe the crisp night air. I imagine myself roaming Porto Alegre, Brazil, happily drunk while I take in the sunset over a city that perfectly blends Brazilian flair with old European heritage. Or perhaps I’m eating the best damn curry I’ve ever had while downing delicious beer in Pak Kret, Thailand. And all the while, I see myself in these places with fellow Chicago Fire fans and our brother and sister supporters of Atlético Madrid, Sport Club Internacional, and Muangthong United F.C. And let’s not forget Besiktas (Istanbul), Club America (Mexico City), Al Ain (Abu Dhabi), Shanghai Shenhua, or Raja Club Athletic (Casablanca) either. The latter five would make for some epic adventures as well, would they not?

Such were the thoughts running through my head when Chicago Fire S.C. joined Atlético Madrid’s, “A Team for the World” partnership. A couple of years ago, nine teams from around the world formed a pact to help each other improve all aspects of their respective operations. While once simply an idea, this alliance is slowly becoming a reality. Case in point: when I see Austin Berry and Jalil Anibaba taking pictures with Radamel Falcao and walking the streets of Madrid, I see a tangible transatlantic relationship developing. And in the case of the Fire’s young defending duo, we see the business and technical side of the relationship coming into focus, but what of the supporters’ side?

A match made in supporters’ heaven. (image: tumblr.com)

I’ve been a Celtic F.C. fan for as long as I’ve been a Chicago Fire fan. As such, I see the parallels, or maybe the paths, an international partnership can create for a club and its fans. One of the first things I learned as a “Bhoy,” or “Tim,” is that Celtic has a strong history with FC St. Pauli that dates from the 1990’s.

Although some see the clubs’ relationship as born of similar political and ideological views, it actually came to fruition because both sets of fans simply got together to drink, watch football, and have fun. And dammit, isn’t that what it’s all about? Anyway, St. Pauli fans have come out to join us Celtic fans when our Hoops played their crosstown rivals Hamburg SV in Germany, and we Celtic supporters have attended St. Pauli matches as well. A 2010 friendly between Celtic and St. Pauli comes to mind too, which wouldn’t have happened without their fans’ mutual love for one another. This relationship did not form due to business relations. It was grassroots and organic.

According to the BBC, in late 2010, Celtic brass formed a partnership with Mexican side Santos Laguna to, “transfer knowledge and work positively together in a number of areas, including coaching, sports science, player development and technical analysis.” Like Celtic, Santos Laguna wear green-and-white hooped shirts, and have strong ties to their respective communities. This was an obvious business move, and fans simply went along with it. But since then, Celtic hasn’t sent any players to Santos, and not a one has flown from Mexico to Scotland. Slowly though, signs of a tangible relationship are appearing. 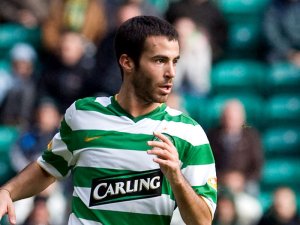 One of Celtic’s former players, the suave Spainard Marc Crosas, made his way to Santos after leaving Celtic, by way of Russian Premier League side FC Volga (fyi – Marc is an active tweeter who regularly interacts with Celtic fans and gives shout-outs to the club). In 2012, when Santos faced Seattle Sounders (puke) in the quarterfinals of the CONCACAF Champions League, Celtic sent an official request (that gave me much pleasure, on two fronts) to its Seattle area supporters, asking them to turn out and cheer for former Bhoy Crosas and Santos.

So, you may ask, what does all this Celtic talk have to do with Chicago Fire? Well, I wonder if Fire fans (along with the front office) could form a significant, active relationship with at least one of Chicago’s eight partner clubs. Club America is a partner, and Mexico is not too far away. Plus, the Fire already have a large Latino support base, and I imagine that a good number of them are America fans. But if such a friendship ever comes to be, I hope everybody drinks Victoria or 5 Rabbits and shuts up about the national teams; though drinking would probably make matters worse in this respect.

Of course, there are other “A Team for the World” clubs. But can deep, lasting relationships form when they (and their respective fans) are at great distance from one another? Chicago to Mexico City is a (relatively) short, inexpensive trip. But Chicago to Shanghai is not. So what can Chicago Fire fans themselves hope to get out of their club’s strategic partnership? To be welcomed when we travel abroad to show off our colors? (MLS must first align its schedule with the rest of the world before this happens.) Moreover, would we Fire fans reciprocate if one of our partner clubs came to Chitown? I think we would. Evidence of this does exist. Take for example the fan activity before the 2012 Aston Villa friendly. But the question is, would exchange activities with our partner clubs’ supporters be organized, inclusive, and sustainable?

Or, when it comes to the Fire’s strategic alliance, maybe nothing of consequence will happen on the supporters’ side. Perhaps the partnership will simply amount to sending some players overseas to train each year, and perhaps the Fire will buy or receive a player on loan every so often from one of their partner clubs. This is certainly the most cynical option.

But, conceptually, and using the Celtic/St. Pauli relationship as an example, Section 8, Sector Latino, and other Fire supporters could unite to form their own relationships with other MLS supporters’ groups. First and foremost, I’d like to see this happen with Timbers Army.

As a Celtic fan, I appreciate that there were some fellow Bhoys in Portland who did not want their MLS supporters group named “The Rangers,” but I cannot abide the fact that a Timbers ex-coach was a “Ger.” Plus, Kris Boyd remains on their squad. I digress.

Here’s my vision: Fire fans make a trip to Portland and are warmly welcomed with pomp, circumstance, and beer. Then, in the summer, my hometown brewery Three Floyds collaborates with Gigantic Brewing of Portland to brew and market a beer that commemorates and sanctifies the Chicago/Portland supporters’ bond. If beer can’t facilitate a lasting relationship, I don’t know what will.

Come together. For the soccer. (image: beerstreetjournal.com)

This friendship could have the same organic start that Celtic and St Pauli’s had, and I hope it would turn into something just as magnificent. But beyond our own borders, I hope to one day travel the world with fellow Fire fans and join in some merriment with some brothers and sisters from other clubs. Now that would be something special.

But, if the first go-around turns out to be Portland instead of Madrid, well, I’m cool with that. My girlfriend and I have always wanted to visit the Rose City, and we enjoy watching Portlandia whilst well-imbibed. Ultimately though, we North American soccer fans must come to learn what our cohorts throughout the world already know: when it comes to soccer support, it’s always good to know that someone, somewhere, has your back.

– Contributing Writer Scott Rutkowski loves his Fire, his Celtic, and his brew. Follow him @scottathon_