It’s been a positive preseason thus far for the Chicago Fire. New signings have begun to blend into the squad quite well and several newcomers look like they’ve certainly earned a spot for themselves come the regular season. Preseason results are really not anything to put much stock in, yet the Fire’s 3-1-1 record sits well with most supporters. Saturday night’s victory against Houston Dynamo in the first match of the Carolina Cup Challenge tournament in Charleston, South Carolina showed supporters that the Fire are nearly ready for the 2013 MLS season.

The Carolina Challenge Cup is an excellent tournament leading into the season. Aside from the opener vs. Houston, two matches remain against USL side Charleston Battery (Wed., Feb. 20th at 6:15pm cst) and Vancouver Whitecaps (Sat., Feb. 23rd at 4pm cst).

Perhaps the most worrying aspect of the starting XI is manager Frank Klopas’s continued insistence that Logan Pause start at right back over Jalil Anibaba.  I won’t bemoan the square peg Pause being shoved into the round hole of right back – much. Additionally, I had hoped to see new trialist, right-back Pascal Chimbonda (who has a strong English Premier League pedigree), but I suspect he’ll see the pitch in the tournament’s next match. Another interesting aspect to this match (as it has been all preseason) is the opportunity to examine the new-look midfield, which only brings back one player (Patrick Nyarko) from last season.

From the outset, some of the Fire players still showed a good amount of rust, but the preseason exists to work the kinks out of the system. The early part of the first half was uneventful but not dull. It is obvious that Jeff Larentowicz is going to be a solid defensive midfielder for Chicago, a fact that is known simply from his lack of mistakes and his precise movement of the ball out of the defensive third. A defensive midfielder is doing his job and doing it well when you don’t notice him, but at the same time see the opposition’s attack continuously fall flat just as it enters the final third. And for the first fifteen minutes vs. Houston, that was certainly the case.

In the fifteenth minute, Logan Pause made a sloppy push that awarded Houston a free kick just outside the box. Adam Moffat then stepped up and powered the ball low through the wall to put the Dynamo up 1-0. If Pause continues to be the choice for the right back position, fouls like this will be a problem throughout the season. At best, one could say that Pause was heavy-handed; a more accurate description would be clumsy. The Fire captain is a stalwart defensive midfielder. However, being a fullback requires a different kind of mentality in tackling and guarding the box. Although Pause has played right back in a pinch in the past, it’s nonsense to say he’s familiar with the position and the role it demands of a player.

In the minutes after the goal, Chicago was able to regroup and solidify, which was good to see. Too often the Fire take between 10-15 minutes to get their focus back after an opponent scores, a trait that can be deadly. Yet the team didn’t let Houston’s goal faze them. A charming blackout in the live online stream occurred not long after Houston scored, and to my pleasant surprise, the Fire had scored two goals when the feed came back online. 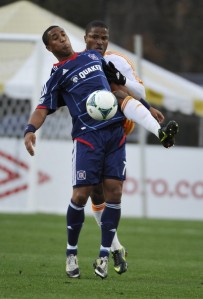 Sherjill MacDonald evened the score at 1-1 in the 24th minute and new signing Dilly Duka was able to force an own goal in the 27th thanks to Patrick Nyarko switching the attack to the other side of the pitch. It should be noted that if Pause stays as right back, we may be in for a quiet season from Nyarko. Since Pause is not the kind of fullback who could successfully or, rather, regularly overlap with any kind of speed or provide solid crosses himself, Nyarko will mostly have the right side attack entirely on his lone shoulders.

In the 30th minute, Gonzalo Segares went down after falling awkwardly. He was replaced by Jalil Anibaba, who took up at right back and moved Pause to the left back position. The only odder place to play Pause than right back is left back. However, Pause acquitted himself adequately, especially given that the Dynamo’s Kofi Sardokie looked good all night and was himself a constant threat.

What aided the Fire’s defense was the fact that Houston’s Cam Weaver seemed to want to practice drawing fouls. It appeared as though Weaver went to ground with the slightest of touches or sternest of looks. Fortunately, the referee was never taken in by Weaver. Then, Houston had to make its own injury substitution when Ricardo Clark collided with Sean Johnson. One hopes the subbing of Segares and Clark were mere precautions for the loss of either player, as their respective losses would be a serious blow for their squads. [NOTE: chicago-fire.com reported late Saturday that Segares’s ankle injury is not deemed serious]

Prior to close of the first half, the Fire turned on their attack. It looks as though Sherjill MacDonald and Dilly Duka are building a strong left-side partnership. Duka almost netted a second goal when he had a one-on-one opportunity with Houston ‘keeper Tally Hall. Chicago’s new left-winger showed a good presence and a cool head as he pulled down a cross and quickly shot against Hall. Though unfortunately for the Fire, Hall made the first of several superb saves as he was able to deflect the shot with his trailing leg.

But Hall’s save didn’t deter the Chicago attack, as new signing Joel Lindpere was able to provide several slide rule passes that harried the Houston defense. When halftime arrived, the Fire held a strong 2-1 lead. According to team writer Jeff Crandall, the first half marked the first time Chicago had scored more than one goal in a Carolina Cup Challenge game, effectively dispelling their Blackbaud Stadium hex.

At the whistle, Chicago seemed to pick up right where they left off. Around the 46th minute Anibaba provided an excellent cross to Chris Rolfe (oddly silent in the match up to this point) whose downward header became Tally Hall’s second excellent save of the night. A Chicago corner came of Hall’s save, and as Lindpere shot the ball into the box he found the “Ginger Ninja” Larentowicz, who struck a brilliant header into the back of the net.  The 3-1 margin solidified Chicago’s position.

With a sure lead, the Fire made several substitutions, bringing Corben Bone in for Nyarko, Steve Kinney for Friedrich, and Yazid Atouba for Duka.

Anibaba: Get off his back. (photo; zimbio.com)

Shortly thereafter, not wanting to be upstaged by Tally Hall, Sean Johnson made a highlight reel save of a long-distance screamer from Giles Barnes. Yet in a fashion similar to Hall, Houston was able to pull one back on the ensuing corner kick as Cam Weaver headed in a goal in the 64th minute.

As is par for the course during preseason, the next few minutes saw another slew of substitutions. Houston switched out seven players and Chicago brought on Brazilian midfielder Alex – only this time as a forward. Daniel Paladini, Hunter Jumper, and Maicon Santos also saw the pitch, and the almost entirely new eleven were able to see out the match.

Around the 84th minute, young left-winger Yazid Atouba (who despite remaining unsigned seems to have secured himself a spot on the roster) drew a penalty that was taken by veteran striker Maicon Santos. However, Tally Hall was able to guess right and save the shot.

Santos wasn’t satisfied however and not two minutes later missed with a shot that went barely wide of the right post. Then, in stoppage time, Maicon got into a bit of a tussle with Houston defenders Jermaine Taylor and Warren Creavalle. The reason for the grievance was unclear, but the shoving done by Santos was perfectly clear. Yet Houston could do little to draw even and Chicago opened their Carolina Challenge Cup account with a solid 3-2 win.

All in all, the Fire played well and the 4-4-2 looked effective. Given the ability of Dilly Duka to play wide on the left and the understanding he’s developing with Sherjill MacDonald, it seems as though Duka will be able to provide the attack that Fire supporters thought they were going to get late last season with Alvaro Fernandez.

Patrick Nyarko had a good bit of rustiness; his first touches were hard and his timing was off.

Although the defensive core perhaps remains thin, the back line displayed versatility and strength. Pause was able to switch from right to left back, Anibaba moved from right back to center back, and Steve Kinney appeared healthy and back on track with several vital clearances.

With two preseason matches remaining, Chicago Fire fans are certainly looking forward to watching their squad continue to get its footing ahead of the rapidly approaching 2013 MLS regular season. The Men in Red look to continue their preseason winning ways vs. host USL side Charleston Battery this Wednesday evening, February 2oth, at 6:15pm cst. Check out the live stream at uslnation.com

Contributing Writer Daniel Casey writes about soccer hoping someday someone will pay him to do so. He writes regularly for Total MLS, Soccer Newsday, and now On The Fire. Follow him on Twitter @winslowbobbins