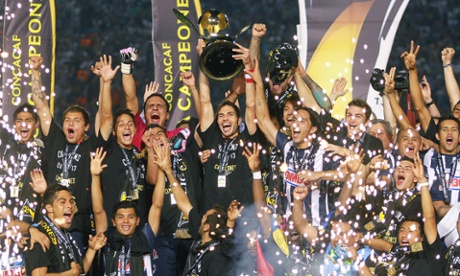 CF Monterrey clinched their third consecutive Concacaf Champions’ League title by beating Club Santos Laguna courtesy of the most nerve-wracking 4-2 home win you can ever hope to see.

Sixty minutes into the second leg, Santos Laguna had a 2-0 lead and the seemingly straightforward task of closing out the match against a dispirited, demoralized and dejected Monterrey. Sure, CSL had been outplayed for the first 35 minutes, but that seemed like a different game twenty minutes later.

Almost as different as the drab first leg of this tie, which ended 0-0 and set up the winner-take-all second-leg at Estadio Tecnologico in Monterrey. And those of us who pissed away 90 minutes of our lives that shall never be returned watching the fetid pastiche of a football match that was the first leg were simply grateful that the second leg had delivered goals.

Darwin Quintero’s opener wasn’t spectacular – a simple tap-in off an Edgar Lugo pass-cum-shot that lasered through Los Rayados’ defense to the feet of CSL’s sparky striker – but it did open up the game by eliminating the possibility of extra time or penalties.

Monterrey came out flat for the second half, and CSL scored another simple goal thanks to Felipe Baloy’s strength. Goal-bound headers off corners are commonplace, but it is rare to see a man restrain two markers, one with each arm, long enough to nod the ball into the net.

And that should have been the match. Leading by two goals away from home, CSL had demonstrated in two short bursts of play on either side of half-time that they could bully and bewilder Monterrey. Santos Laguna’s loss at home in last year’s CCL final to a late Monterrey goal would now be avenged.

Monterrey’s Aldo De Nigris did score in the 60th minute, but CSL still seemed to be on the journey to victory. Then, with scarcely ten minutes remaining, Neri Cardozo scored and Monterrey were level with one more goal needed to overhaul the away goals rule and complete the comeback. Then Monterrey coach Víctor Manuel Vucetich changed his formation to one with two center-backs and eight men forward and Santos Laguna buckled. Anxiety is a wonderful ingredient in a soccer match.

De Nigris scored again and it became clear that Santos Laguna would painfully lose in the CCL final again. The only thing missing was a goal from Humberto Suazo, and the Chilean goal-machine duly obliged. Chupete surged into the penalty area in injury time, managing to stay upright in front of goal for perhaps the first time in the match, and knocked in Jesus Zavala’s cross.

A two-goal deficit transformed into a two-goal victory in thirty minutes. A cup final to treasure.

Los Rayados give good cup. This is their third consecutive CCL title and each victory has been more dramatic than the last. In 2011, Real Salt Lake brought a 2-2 draw and a very good chance of winning CCL back from Mexico. Monterrey managed only one shot on goal, but that one shot was taken by Suazo and he scored. RSL didn’t. 3-2 aggregate win, and the cup, to Monterrey.

In 2012, Suazo gave his side a two-goal lead in the first leg in Monterrey. But Santos Laguna scored twice by the 51st minute of the second leg (sound familiar?), and were favorites to grab the winner in front of their home crowd. Until, a late Neri Cardozo goal killed CSL’s momentum (sound familiar?).

This year’s performance topped both of those for drama, but there is hope that Monterrey’s best work is yet to come. There is no place in CCL for the previous year’s champion. Each team qualifies by whatever mechanisms have been devised by their respective leagues. And in the case of Liga MX, the way you get to CCL is by making the final of the Apertura or Clausura. Monterrey missed out on the 2012 Apertura final. And this weekend, if results don’t go their way, Los Rayados could miss out on the 2013 Clausura playoffs completely. This would mean the three-time champion of CCL, the undisputed champion of regional tournament football, would be missing from next year’s competition.

To my mind, that would necessitate the insertion of an asterisk next to the name of the 2013-2014 CCL winner: a “did not play Monterrey” disclaimer. If you share my feeling, then spare a thought for Humberto Suazo & company this weekend. They need at least a point from their match with Cruz Azul, and a helping hand from other results.

Which is where Fire fans might be able to help out. Because the match Monterrey needs to go their way is between Queretaro and Puebla. And Puebla is currently home to former Fire favorite DaMarcus Beasley.

So if you believe that CCL would benefit from a fourth chapter of Monterrey’s epic game of chicken with destiny, then you should root for DaMarcus this weekend. Both for old time’s sake, and the sake of CCL.

OTF contributing writer Austin Fido is considering his own diplomatic mission to Mexico. Follow him @canetop.