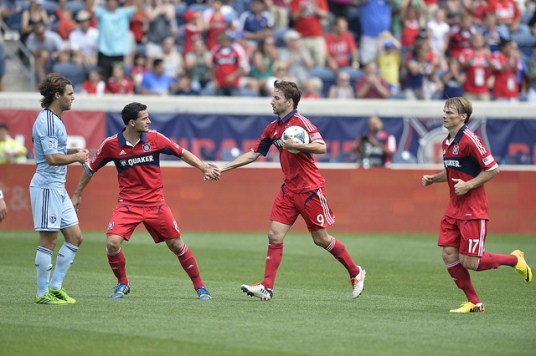 We’ll reach out our hands to you, We’ll have faith in all you do. (photo: chicago-fire.com)

Each and every week, OTF’s writers and contributors chime in on the state of the Fire…

A fatigued Fire squad took the field at Toyota Park last Sunday to square off against Sporting Kansas City in a Midwestern clash that could have secured the former club’s status as table climbers. The Men in Red looked sloppy and uninspired after going down 2-0 before the ten minute mark, but managed to salvage a goal before the first half ended. The second half featured an obviously tired Fire side that rarely looked like it had either the desire or the means to scrape out a result.

Salvation is in sight though.

Survive a friendly, earn a point or three in Vancouver, and enjoy three straight weeks during which mid-week games are not on the docket. It’s not a bye-week by any means, but after a six-week run of ten games, the summer schedule after this Sunday will be a welcome sight.

The biggest gain from last Sunday’s loss should be a wake up call to Frank Klopas: Although the preferred starting eleven is getting good results, there must be some consistent player rotation or the club will suffer the consequences.

A loss finally came and everyone knows why. It’s time to look at what the Fire has (attackers), buy what the Fire doesn’t have enough of (defenders), and start planning for the long run. After all, half a season remains…

The Fire’s home loss last Sunday can be explained by this old adage:

“The more things change, the more they stay the same.”

Among other transactions in the Klopas era, the Men in Red have made shrewd MLS pick-ups (Gargan, Oduro, Duka), acquired an unwanted Seattle DP (El Flaco), and re-acquired old lovers (Sega, Baky, Rolfe). After the Fire change its personnel in bulk, what immediately follows is a short-rotation and an unflinchingly rigid starting XI.

Every four months or so — after another round of shuffling the deck — the league catches up to the Fire’s adjustments and Chicago enters another funk (see: mid-2011, mid-2012, the end of 2012, the start of 2013). I am fearful Sunday’s loss is the beginning of another period during which league once again adjusts to and limits the efficacy of the Fire’s current group.

Another constant in all this change is Klopas’s crew’s inability to attack the game from the first whistle. Against strong opponent Sporting KC, an early-game deficit finally caught up to this bunch. Maddeningly, it’s a habit that hasn’t been broken in over a calendar year.

Finally, the lack of urgency last Sunday (and the lack of a visible game plan) to come back in the second half (down only a goal) in front of the biggest crowd of the year and on national television was infuriating.

This Sunday vs. Vancouver? Mike Magee ability to impose his desire to win on the rest of his teammates will be tested against Camilo & Friends. Chicago must avoid the all-too-routine slow start and get potent wing play if it’s to get a result on the road. The back line cannot afford to allow the Whitecaps’ playmakers too much time on the ball — like SKC’s Graham Zusi had during Sunday’s “shoss.” 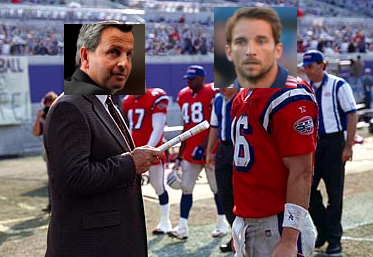 Woman Reporter (Running to catch up with McGinty heading to the locker room for halftime): “Coach, what will Washington need to get back into this game?”
Jimmy McGinty (pause): “You’ve got to have heart.”
Woman Reporter: “Can you elaborate?”
Jimmy McGinty (striking his chest with his roll of papers): “Miles and miles of heart.”

Everything we’ve worried about this season was evident in the Sporting Kansas City loss — conceding first, lack of possession, bad set pieces, failing to capitalize on opportunities, poor defensive line communication, questionable substitutions, fatigue, and now we can suggest (as Magic Mike did) lethargy.

As evinced from his post-match comments in the video link above, one thing we can confidently remove from the list of worries is a lack of leadership. It seems when Mike Magee arrived in Chicago, he entered a wholly dispassionate locker room and promptly decided to take control. It’s been clear on the pitch, and now it’s been made clear to the media: He wants to win, and if you’re not “all in” he’s going to call you out.

Which brings us to Vancouver. Vancouver is a fringe playoff team rounding into form. If Chicago Fire thinks it is a playoff team, it should get a result on the road this Sunday. I’m not confident it will, but with Magic Mike throwing down the gauntlet there should be no additional motivation needed.

But, there will be excuses if they lose: Sean Johnson is still warming the USMNT bench, Daniel Paladini is out for being Daniel Paladini, and Gonzalo Segares is out after a ghost foul on Graham Zusi earned him one too many yellow cards. With a lack of defensive depth, fatigue from a mid-week friendly, plus the absence of left back Sega and fire starter Paladini (not to mention captain-in-name-only Logan Pause), coach Klopas’s Starting XI will be all jacked up.

Given the current state of affairs, nabbing a point in Cascadia would be more than swell.

Losing 2-1 to a playoff-caliber team with two USMNT starters isn’t the end of the world. Regardless, Sunday was one of the most discouraging outings of the season for the Men in Red; not for a lack of talent, but, as Mike Magee so eloquently put it, for a lack of effort.

Let’s disregard the fact that Fire defenders continue to make the same mistakes every match, that they inexplicably freeze up on set pieces, lose and give away the ball too often, or that Berry and Segares look exhausted from never getting rest. Let’s ignore Lindpere, who is too slow for this league, and MacDonald, an embarrassment who has completely checked out.

Frankly, the most depressing aspect of Sunday’s game was that Chicago didn’t hustle like a team that wanted to win. And if they can’t do that at home, in front of the largest crowd of the year, in a nationally-televised event on ESPN, against a top Eastern Conference rival for a playoff spot, when will they?

On the coaching side, Patrick Nyarko should have been rested, the team should have come out of the half motivated with a clear tactical plan, and subbing in Lindpere and MacDonald should never have happened when the team needed an offensive spark.

To win in Vancouver and beyond, Chicago needs more than just a big-name striker; they need depth in the back line, a culling of dead weight, a coach with a plan, a more transparent front office, and the heart of Mike Magee in the chest of every man on the field. Until then, this team will continue eking out wins against struggling teams, losing to good ones, and looking up at the Eastern Conference’s top five.

Why did the Fire lose to the Wizards on Sunday? Allow me to quote (should be) captain Mike Magee:

“We started the game like shit, and then somehow got even worse.”

This game was brutal from the start, as the Wizards had a 2-0 lead inside of 10 minutes. Once again, a slow start forced the Fire to work from behind. They did respond with a goal later in the first half, but that was pretty much it. The game plan in the second half seemed to be to try to get the ball to the Wizards as soon the Men in Red found possession.

With the offense struggling, Klopas opted to sub in Sherjill MacDonald — for a spark or something — but we all know MacDonald has been closer to a wet blanket on a fire than a spark. The Dutchman promptly came in and did nothing. He had some runs, but either stopped running with the ball for some reason, or crossed  it into the box where there were no Fire players within 20 yards of the ball.

France put up a better offense in World War II than MacDonald has this season.

The game was just a stinker, and hopefully not a sign of things to come, but Mike Magee’s interview after the game was EXACTLY what I wanted to see.

To win against Vancouver on Sunday, the Fire will need to do the opposite of whatever they did this past Sunday against the Wizards. Essentially, they need to play hard, smart, and score more goals than Vancouver.

I absolutely cannot stop praising “Magic” Mike Magee. The man would give 100% in a game of checkers if it came down to it. While the Chicago native is a constant ball of energy, it showed last Sunday the rest of his teammates are not.

The back line doesn’t have Magee’s energy and needs a break. Tired legs couldn’t be more evident in Sunday’s lackluster performance. The front office sees it, Frank Klopas sees it, and the fans see it.

I understand the need to field the best XI to make a playoff push, but what good will it do when the first team is running on empty at the finish line? We saw this towards the end of last season with Chicago simply running out of juice. At least Klopas is now forced to find another left back against Vancouver due to Gonzalo Seagres’s yellow-card accumulation. Hopefully, it’ll be Jamaican international and former Crew man Shaun Francis.

And how useless was our DP, Sherjill MacDonald? It’s obvious the Dutchman wants no part of the Fire organization. As a fan, I don’t ask for much: Just give me a player who wants to give 100% and win. Let’s try to make that happen during this transfer window, shall we?

In order to have a shot at beating a pretty good Vancouver team, Klopas must field some “fresh” players. Chicago is a team scrapping away at every game to get a result. If the Fire can acquire some reliable defensive depth and get (and keep) Logan Pause healthy, it could refresh a squad already drained at the halfway point of the season.

We knew the match against Sporting Kansas City would be the litmus test on how far Chicago Fire had progressed during its nine-game unbeaten streak across all competitions. Without digging into the fact that Klopas and company found themselves down 2 – 0 within the first ten minutes due to poor defending and goaltending, let’s instead discuss playing with heart and head-scratching substitution choices.

Mike Magee’s post-match locker room comments were bold: If it wants to be a contender, the team must play with more heart and stop making poor mistakes that stunt chances to win. Mike Magee is trying to shake the locker room out of mediocrity, and I like it.

Another reason the Fire couldn’t muster a result against SKC was it could not control possession of the ball long enough in the second half to make a fighting chance of it; the Fire chased shadows during large portions of the latter 45.

Also, the slowest man on the pitch, Joel Lindpere, was inserted when Chicago needed an attacking injection. On such a hot day, I would have rather seen young, speedy Yazid Atouba try to break down SKC from the wings.

Finally, why on earth would Frank Klopas play MacDonald over Santos (or Amarikwa for that matter) after “the Recliner” has made public his desire to return to the land of Belgian ale?!

If you’re a die-hard Chicago Fire fan who’d like to take part in the OTF Roundtable, please send Editor Scott Fenwick an email at manonthefire97@gmail.com to find out how to get in on the conversation and make your voice heard! Cheers.