In Defense of the Defenders: Why Chicago’s Back Four Look So Tired 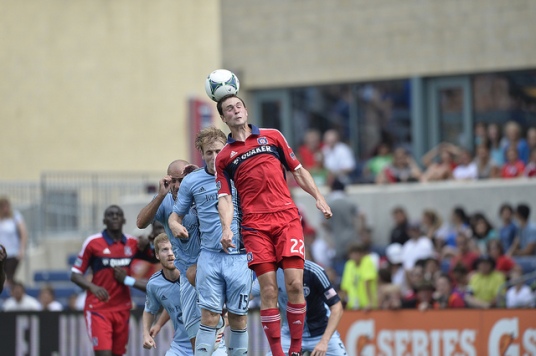 With a little help from the Editor, OTF’s Adam Morgan brings you a disheartening case of Chicago Fire coaching malpractice and man-management failure…

Lately, defending has been a bit of a nightmare for Chicago Fire. Mental gaffes, slow feet, and poor positioning have all conspired to cause the Men in Red to allow 2.5 goals per match this month.

The resulting three losses and one 3-2 comeback win (against an undermanned and struggling San Jose Earthquakes squad) are thus frustrating for all, and perhaps puzzling for some. Chicago features four talented, experienced starters along the back line, so what gives?

One explanation for the lackluster defending is player fatigue, particularly with regards to Austin Berry, Jalil Anibaba, Bakary Soumare, and Gonzalo Segares. Many in Fire Nation believe these guys are mentally and physically exhausted from too many consecutive minutes on the field.

But is that true? Have the members of Chicago’s choice back four really played more minutes than the average MLS defender?

The answer is unequivocally yes.

Thus far in 2013, MLS defenders have averaged 1,013 minutes*. By comparison, here’s how many minutes Chicago’s starters have racked up:

* Not including defenders who’ve only played 90 minutes or less. There are only a handful in the league, and they skew the averages.

In fact, there are only six defenders who have played more MLS minutes than Anibaba and Berry this year: AJ DeLaGarza, Ray Gaddis, Zach Lloyd, Sheanon Williams, Matt Hedges, and Sean Franklin.

However, those players have all played 20 games this season (compared to Chicago’s 18). If you project Anibaba and Berry’s MLS minutes to 20 games, you wind up with the staggering number of 1,800, which is more than any defender on any team in the league.

Even further (as if what you’ve already read isn’t bad enough), the statistics above don’t include U.S. Open Cup matches, of which Chicago has played three this summer. And guess who’s played all 270+ minutes of those games? You guessed it: Anibaba, Berry, Segares, and Soumare. That brings Anibaba and Berry to a staggering overall total of 1,890 minutes on the field in just four months, with Segares not far behind at 1710.

Regarding Bakary Soumare, he made his 2013 debut with Philadelphia Union on May 11th. Roughly ten weeks later, the big man from Mali has started 14 consecutive matches (11 in MLS and three in U.S. Open Cup play). 14 games in ten weeks equals 1251 minutes, which is 200 more minutes than the average MLS defender has played — since the beginning of March. Furthermore, Soumare has logged 90+ minutes in all but one of the 14 games he’s played in 2013 (vs. LA Galaxy on 5/15, 81 minutes).

Of all the Men in Red, Jalil Anibaba and Austin Berry have looked the most fatigued, and here’s why: they’ve played more minutes this season in 18 matches than any other defender in the league. Throw in the USOC matches, and it’s not even close.

Gonzalo Segares is 427 minutes above the MLS average, and he’d be even higher had he not been suspended for Sunday’s match against Vancouver. And again, add his USOC minutes and Sega’s played as much or more than anyone in the league.

As far as Soumare’s concerned, well, the facts laid bare above speak for themselves. He needs a rest just as much as his three back line mates.

So, do the Men in Red have an excuse to be exhausted? Well, it appears Anibaba, Berry, and Segares certainly do. Maybe Baky too. Hopefully, the addition of Shaun Francis will help, but Chicago still needs more depth along the back line, be it from Yamith Cuesta, Elias Vasquez, Hunter Jumper, or someone else.

Most importantly however, we must seriously question the competency of Chicago Fire’s technical staff. Professional athletes are not meant to be run into the ground. Fatigue not only compromises performance, but increases injury risk.

In the case of Chicago’s back line, Frank Klopas and his cohorts have acted irresponsibly, and everyone who works for and cares about the club is paying the price.

Note: All direct criticisms of Frank Klopas and Chicago Fire’s technical staff herein are written solely by the Editor.

OTF’s Adam Morgan is an award-winning screenwriter and the author of Best Hikes Near Chicago. In between hiking and watching the Beautiful Game, Adam has also written for the Tribune Company, Fox Television Studios, Publishers Weekly, and Booklist. Follow Adam @earthmorgan

57 thoughts on “In Defense of the Defenders: Why Chicago’s Back Four Look So Tired”