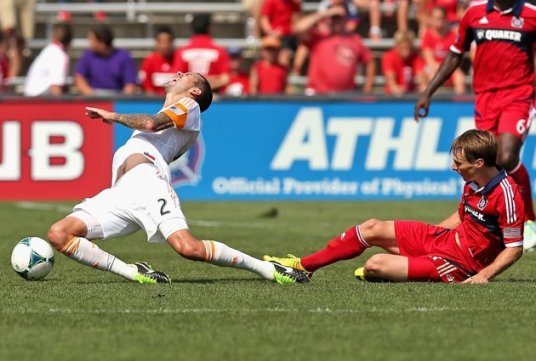 An ugly tackle to go with a less than pretty performance by the Men in Red (photo: uk.eurosport.yahoo.com)

When you pack it in with a one goal lead you, pardon the pun, play with Fire. And certainly, when you fail to adjust quickly to your opponent’s changes while holding on to a one-goal lead and fail to finish your scoring chances, you’re asking for bad news. Unfortunately, both those things happened at a hot, steamy, sparsely attended Toyota Park on Sunday afternoon, as Chicago Fire dropped a needed two points to visiting Eastern Conference foe Houston Dynamo in the 90th minute.

Could it be that the botched Mariachi version of the Star-Spangled Banner on Hispanic Heritage Day was a bad omen, a harbinger of a job half done? Maybe. Superstitions aside though, I’d like to think that two less-than-strategic second half substitutions and an inexplicable change in tactics doomed the Fire. Frank Klopas is now 1-2-5 when he goes head-to-head with Houston’s Dominic Kinnear, who, for whatever reason, has the upper hand on his counterpart more often than not.

Through 45 minutes, Chicago had the home crowd feeling confident. Aside from an early defensive lapse by Bakary Soumare, and an occasionally threatening Houston counterattack, the Fire had the best of their opponents, who looked a step behind and were content to absorb pressure. Uncharacteristically, the Men in Red dominated possession in the first half and played an attack-minded game in Houston’s end of the pitch, testing goalkeeper Tally Hall with a number of quality chances. Chicago was certainly the livelier side and looked well-rested. 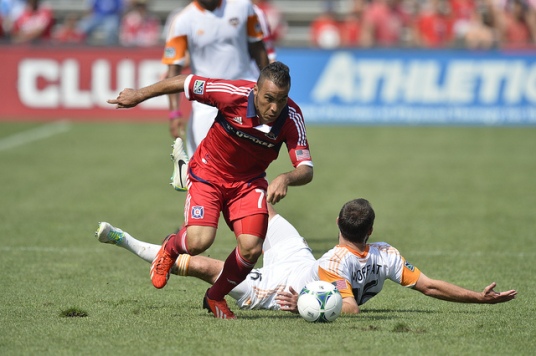 Eventually, the dam broke, as Mike Magee twisted a corner kick into the area off center back Bobby Boswell’s head and into the back of the Dynamo net for an own goal. 1-0 Fire, and it seemed as if the day might go the home team’s way — especially after Chris Rolfe escaped with a yellow card after an ugly, reckless challenge on Houston’s Eric Brunner in the 40th minute. Rolfe will be lucky to avoid suspension if the MLS Disciplinary Committee has a second look at his foul.

After a sleepy, uneventful start to the second half, the tide began to turn in Houston’s favor. Dilly Duka, who had played quite well, came off for Patrick Nyarko — another classic Klopas substitution for its own sake. Shortly thereafter, Kinnear made a tactical shift to three forwards and went with Cam Weaver for Warren Creaville in the 66th minute. Houston, looking for a goal, opted for attack-minded tactics and took control. Kinnear made yet another offensive substitution with the speedy Andrew Driver for Giles Barnes in the 77th minute, injecting further life into his heretofore lackluster side.

The following infographic shows how the Dynamo were able to wrestle control of the match following their two second-half personnel changes:

As the tide turned during the last half-hour, Frank Klopas inexplicably decided to pack it in while his team clinged to a one-goal lead. It’s puzzling. If your team is having success in attack, why switch it up? Why hunker down and let your opponent run at you? Why not try to gain possession and pressure the byline instead of dilly-dallying in the midfield? To be sure, the Nyarko and Juan Luis Anangonó (70′, for Rolfe) substitutions surely weren’t solely defensive in nature, but their’s was a counterattacking, slow-moving posture.

Magee had a look in the 73rd minute, but the far post got in the way of a two-goal Fire lead. Anangonó almost opened his account in the 77th, but volleyed wide. After that, it was two banks of four for Chicago and nail-biting time. Unfortunately for Fire Nation, the gamble to defend during the final 15 minutes backfired.

After Klopas weakened his squad with his final substitution (Lindpere for Alex, 84′), a surprising mental lapse by Patrick Nyarko cost his team a needed two points. Nyarko’s failure to man-mark Adam Moffat — an astounding sequence in which he simply watched Moffat run into the box and blast a Corey Ashe back-heel pass past Sean Johnson — may prove decisive when the 2013 regular season is said and done.

Certainly, as the regular season winds to its close and the playoff window shrinks, someone other than Mike Magee must step up and score goals for the Fire. Magee’s scoring touch has eluded him of late, as he hasn’t put one in the back of the net since August 3rd. Reasonably, Chris Rolfe should be expected to pick up his strike partner’s slack. Unfortunately though, Rolfe’s lackluster 2013 campaign continues. As in Chicago’s previous game vs. Sporting Kansas City, Rolfe couldn’t manage to finish an open look at goal that would’ve contributed to a more comfortable two-goal margin.

The magic’s subsided a bit, so somebody needs to lend Mike a hand (photo: chicago-fire.com)

Among other things, when it comes to Rolfe, Frank Klopas’s obstinance is hurting his team’s chances to win when they need to most. Rolfe’s numbers don’t lie:

Surely, it’s time to start Anangonó and give Quincy Amarikwa more minutes as well. And as ineffective as Maicon Santos (who?) can be, his numbers are still better than Rolfe’s when you account for the difference in minutes played. Taking the argument for more attacking prowess further, it’s time to abandon the two holding midfielder set and insert Alex or Daniel Paladini at the top of the midfield in a 4-4-2 diamond. The presence of Cacha Rios has made Jeff Larentowicz redundant. A 4-3-3 would be worth trying as well.

Criticism of the Fire aside, credit to Tally Hall for his Man of the Match performance. A lesser goalkeeper surely wouldn’t have been able to keep his team in this match and allow it to escape with a point. And to give further credit where it’s due, Nyarko’s gaffe aside, Chicago put in a solid defensive effort.

Sparky did good work too (photo by Caroline Reckler)

In summarizing the result, Frank Klopas’s “Sometimes, that’s the way it is…” post-match commentary epitomizes the Fire’s 2013 campaign thus far. Instead of demanding more, expecting to win, and taking responsibility for failure, Chicago’s head man simply shrugs his shoulders into mediocrity, hoping his team will catch breaks. Trying hard isn’t good enough. You’ve got to make smart, meaningful, and deliberate decisions that put your team in its best position to win at all times. You’ve got to be able to counter and have answers for your opponent. Time’s running out.

A road game vs. the Sounders is next on the docket, which doesn’t bode well for the Men in Red. Chicago hasn’t won a game on turf in three years (0-9-2), nor ever in Seattle. Luckily for the Fire, Seattle will be without Clint Dempsey, Eddie Johnson, and Brad Evans, all of whom will be on U.S. Men’s National Team duty for Concacaf World Cup qualifiers.

Unluckily however, Frank Klopas will not have the services of Cacha Rios and Joel Lindpere, both of whom will be playing with Uruguay and Estonia, respectively, during Chicago’s next two fixtures. All in all, the Fire will be fortunate to come out of the Emerald City with a draw. Then, a quick turnaround to Toronto for a Wednesday night matchup from which the Men in Red must take three points.

Be sure to tune in to this week’s episode of On The Fire Soccer Radio, as Brian Smith and I will discuss and breakdown Fire vs. Houston and see what’s in store for Chicago with a mere nine games left to play. Look for the show’s release this Tuesday night and find it on iTunes, Stitcher, or Podbean.

Scott Fenwick founded On The Fire in 2012. Co-host of the On The Fire Soccer Radio Podcast, Scott also contributes to the Guardian’s (UK) MLS fan previews, The Cup.us, Pickles Magazine (UK), and is America’s #1 Rapid supporter.