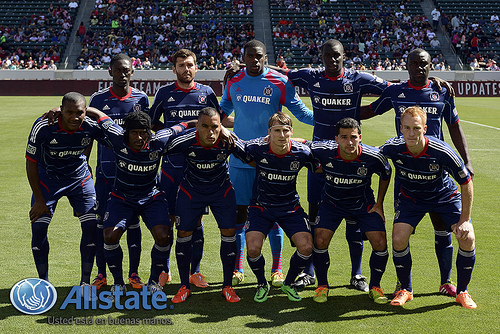 There’s always a reason to complain. Most of the time, complaints are trifles or mere quibbling based in faux nuance. It’s easy to say what you don’t like, to point out what isn’t working. It’s more difficult to justify preferences, to highlight what is successful. The 2014 debut of the Chicago Fire left a lot of us grumbling, but there’s more positives than negatives ahead.

The first match of the regular season was not a pretty affair. The term ‘Klopassian’ is the term many angry supporters had for this effort.  Perhaps effort is the wrong word, perhaps labored is more appropriate. In front of tens of fans, the Chicago Fire played flat, uninspired soccer that had little to no teeth and was content to spastically swat away the opposition’s attempts to score—and only just.

Gone was the vibrancy of the preseason. Fitness seemed to be more than a bit of an issue (Magee, Nyarko, and Rolfe) and the squad seemed to mistake frenetic, panicked passing for high-tempo movement. This latter trait can be forgiven since it was the dominate one for nearly every team this opening weekend (with the exception of the Columbus Crew, a team that recorded a dominate win and displayed sure, quick passing and soft touches for most of the match — take heed). The former seemed a fluke, opening day jitters.

What’s unfortunate is that Chicago has had opening day jitters for longer than I can remember. But let’s not panic just yet. Let’s instead focus on the positives of the match.

First off, unlike last season’s opener in LA against the Galaxy, Chicago scored more and gave up less. The Chicago offense without Mike Magee is the only storyline anyone outside of Fireland is going to consider. It’s a lazy, easy plot to follow and it’s misleading.

It can be argued that Benji Joya and Quincy Amarikwa had immediate impacts on the match when they entered, leading many to question why they weren’t starting in the first place. But such a wondering is futile. Being a dynamic sub is a different mentality than being a starter. However, the starting core has been put on notice: Its jobs are up for grabs. 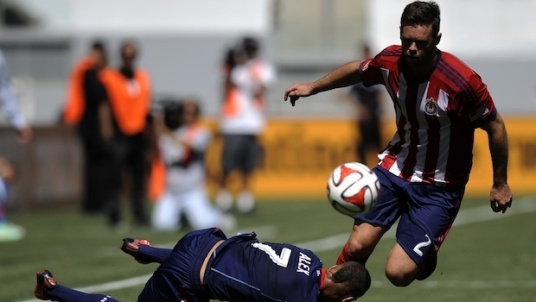 Certain players will need to improve. Alex was nonentity in the midfield. In fact, his most dynamic moves were in making Chivas look like a tough, hard-nosed team. Moreover, Baky Soumare is going to be a liability all season, Sunday was an example of this. Finally, Chris Rolfe has the yips. It’s been plaguing him for ages, leaving him looking listless on the pitch.

The thing is, it all added up to merely a bad day at the office. It is equally likely this coming weekend against Portland we’ll see a dynamic Alex, a harrying presence in Soumare in both boxes, and a Rolfey who will flip the switch and earn those extra inches in his favor.

Quincy Amarikwa, a Goal of the Week contender

Chicago is a slow start team, let us grant that. And let’s keep in mind that over the first weekend of the MLS season, the only teams in the Eastern Conference that played well were Columbus and Houston. Our sample size is too small to start making judgments about what is or is not working.

Let us look at this performance as an exorcism of sorts. A last hurrah, a postmortem for Frank the First. The king is dead, long live the king. So, let’s hope that Frank the Second has put Sunday behind us now. It’s clear that Chicago can’t win playing like it did last season. It can’t win if it falls back into old routines and bad habits. It can’t win if the new faces on the team — especially the youthful ones — aren’t allowed to make their mark.

There are those who would suggest Chicago just needs to accept its place in the MLS landscape: a team that even the league’s pundits aren’t interested in, a team that is dismissed in favor of one of the worst teams performance-wise and attendance-wise in league history. The Fire will prove them all wrong. I say, “Prove it” to everyone involved.

OTF Contributor Daniel Casey writes about soccer hoping someday someone will pay him to do so. More of his soccer scribbling can be found at Soccer Newsday. Follow him on Twitter @misanthropester