Saturday’s match is very much about what Frank Klopas is capable of… (Photo: Getty Images)

That’s how many points Frank Yallop and Frank Klopas have earned (combined) via wins as managers of their current squads.  The new gaffer in Chicago has managed four consecutive draws while Greek Frank sits at the bottom of the East with two draws, three losses, and zero smashed plates.

That said, optimism exists in Montreal and Bridgeview.  After all, Marco Di Vaio and Mike Magee can score goals.  But the bottom line is both managers are laying their heads on pillows Friday night hoping Saturday brings three points.  Somehow, some way, they need to will their respective squads to a win.  Oh, what those points would do.  The difference between winning and losing this one? A catapult into relevance or a steaming pile of scrutiny.

Chicago.  Montreal.  New York.  The three most vibrant cities in Major League Soccer’s Eastern Conference have no wins in their first 15 combined matches.  The Chicago and Montreal front offices yearn for validation of their choice in leadership.  Both believe the moves they’ve made over the last four months should yield victories.  And yet a draw remains a very serious possibility when the Fire and Impact square off on the carpet in decrepit old Stade Olympique this Saturday afternoon.

We love you too Mikey. But we love winning more.

No Eastern Conference team has scored more goals than Chicago (8), but the Fire, along with New York and the Impact, have conceded nine goals – tied for most in the East.  Goals seem imminent.  Maybe they are more likely to come from Magee now, the hometown hero who signed his new contract this week.  Or maybe the aggressive veteran, Di Vaio, will have the touch to make the difference.

This clash will be about which Frank pushes the correct secondary buttons.  Magee and Di Vaio are known knowns.  Maybe Matt Watson or Andres Romero are the unknown knowns who propel their team to victory?

Frank Yallop has options.  The two most difficult are left back and the right flank.  Here’s the steady option Yallop can go with on Saturday… 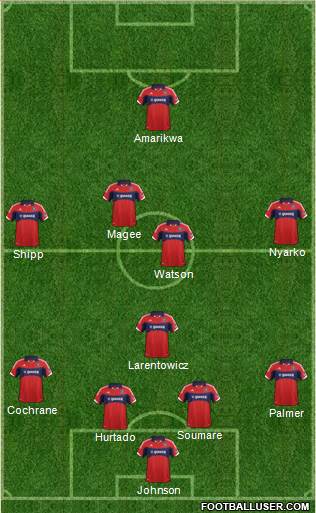 Based on last week’s post game comments by Yallop, Alex, Juan Luis Anangonó, and Benji Joya or Dilly Duka provide a tremendous amount of punch off the bench — the kind of punch that produces late equalizers.  And yet, the starting group has proven it can take an early lead.  Some combination of the starting unit scoring goals and a productive bench should produce a win.

Prediction to argue about in the comments…

Yallop’s bench mob comes through.  After a Magic Mike goal puts an exclamation point on his new contract (the right move for the club, provided the striker continues to strike), the equalizer comes from yet another set piece against the Fire defense.  The difference is playmaker Alex, who feeds Quincy Amarikwa to net the game-winner and bring a smile to Chicago Fire Nation.

The view from Mount Royal with Sofiane Benzaza

Without a win, like Chicago Fire, Montreal Impact is eager to get three points on the board. With an expected weak back line and a questionable defensive mentality as a whole, Montreal made a trade in MLS for a…striker.

As it traded Andrew Wenger to the Philadelphia Union for Jack McInerney, the Impact reinforced the offensive side of the pitch, even though help at the back was needed.  But Jack Mac might be the remedy to the Marco Di Vaio dependence.  After all, there is no harm in getting some secondary scoring, more options and versatility on the squad.

The Impact will be desperate to get three points at home on the carpet, in the temperate confines of Stade Olympique, and go all-in the way it did against New York Red Bulls.  This squad has the capacity to score goals and create chances, but it is not particularly efficient. That said, Luis Robles was on fire for New York last week and stopped a few goals that would have gone in against half of the MLS goalkeepers.

Defensively, the Impact is hoping that Nelson Rivas and Adrian Lopez can give a boost to a back line that needs help. Until both central defenders are fully fit, the central defense pairing of Camara-Ferrari will suffer a lot. Miller brings enthusiasm, some speed, and an eagerness to go forward, but he’s vulnerable to attack on his side.

Hrath Pearce is a MLS left back veteran, but has been a defensive liability at best. Perhaps he needs time to remove the rust?

If Chicago gets speed on the wings, and bodies in the box on set pieces, it’s not impossible to imagine getting one point, if not three, out of the Stade Olympique on Saturday afternoon.

OTF’s Jon Denham grew up about seven miles north of The Harlem End. He now lives in Dubuque, Iowa, and may be its only resident with the MLS Direct Kick package. Jon’s the goalkeepers’ coach at Loras College, your go-to guy for t-shirts and promotional products at Envision Sports Designs, and writes some other stuff at Inclusive Beechwood Aging. Follow Jon @Denham_Jon