Yet another strong, gutsy performance by Quincy Amarikwa (photo: chicagotribune.com)

The Fire remain winless, but OTF editor Scott Fenwick finds improvement and joy in the numbers…

If you look at the metrics, it’s truly bewildering Chicago didn’t come away with its first win in Montreal last weekend. But, as a wise man once said, “This is the soccer.”

Here’s a sampling of the Fire’s statistical domination of Kid Klopas’s Impact:

Tellingly, Squawka’s Man of the Match was Montreal’s Karl Ouimette, as he led a defense that withstood 16 of Chicago’s 17 shots.

Beyond Ouimette, Alex and Quincy Amarikwa were most impressive. While he may have left a bit to be desired in terms of central attacking thrust, Alex played the box-to-box #8 role quite well, punctuated by 85% passing accuracy, 11 headers, and six recoveries. Amarikwa, once again, put in a hard-working, effective shift up top. 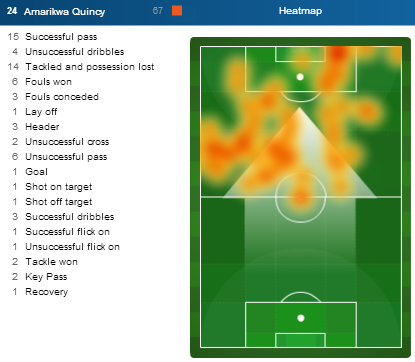 And let’s not forget Big Red. Larentowicz did his part too, and his 89% passing accuracy is well-received.

Here’s a closer look at Chicago’s central midfield pairing’s successful passes. Note the emptiness in front of the box though.

Speaking of passing accuracy, have a look at wingers Shipp and Nyarko. With the exception of four occurrences, they couldn’t successfully feed the ball into or near the box.

For the second week in a row, Chicago’s wingers had difficulty serving the ball successfully from wide, deep areas on the flanks — particularly the left. Unfortunately, Chicago didn’t get much offensive involvement from Cochrane, and his (75%) and Shipp’s (68%) passing accuracy left a bit to be desired. 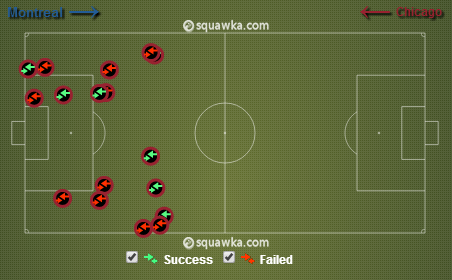 In the end though, the Fire’s assault and barrage wasn’t enough to get the three points.

Conclusion? Statistically, it’s evident Yallop’s Fire dominated the match and went for the win while Klopas characteristically sat back, looked for counterattacking opportunities, and weathered the storm.

In the end, unsurprisingly, Chicago’s unfinished chances spelled the difference between a win and a draw. Effort like last weekend’s should turn one-pointers into three-pointers soon though.

On to the next one!

Scott Fenwick founded On The Fire in 2012 and is its Editor. Follow him @OnTheFire97

One thought on “Breakdown: Fire at Impact”