Sunday was a busy sports day in Chicago. Both the Cubs and Blackhawks threw out the first pitch and dropped the puck, respectively, while the Fire were kicking it around at home too. In Bridgeview, the Kansas City contingent initially looked to outnumber the Harlem End, and it seemed Chicagoans’ attention was elsewhere. But the Fire faithful kept coming, and, while an announced attendance in the 15,000s may flatter a bit, a respectable number of people believed in the Fire men enough to come on out to the park.

And who could blame them? It was a beautiful day (a nice change of pace for Chicago so far this season), and their faith was rewarded.  Plus, the US soccer nation is generally buzzing with a case of early-stage World Cup frenzy, an affliction that turns eyes to the national team training camp.

As it turns out, that camp had a direct effect on this match.  The Sporks were particularly affected by USMNT absences and fielded a team that included about one-half a center back, in the form of 17-year-old debutant Erik Palmer-Brown, who anchored an unorthodox three-man KC back line. The missing men made the first two Chicago strikes almost predictable.

KC’s emergency tactics, and the potent Fire attack, spearheaded by Quincy Amarikwa, made the visitors pay for the sin of having players good enough to call up. Weapon Q and Benji Joya out-foxed their opponents early, and forced KC to make rash decisions, and, naturally, made sure the referee was acutely aware of their indiscretions. Mike Magee stepped up two times to banish the demons of penalty kicks past, and the Fire had a two-goal lead. Still, most Fire fans would hesitate to call pretty much any lead “comfortable” at this point.

But all those presumptions make me feel almost guilty of journalistic laziness. One would think since MLS has a salary cap that promotes parity, and because four to five key members of one of the two competing teams are pulled from competition (or injured), the benefiting club (here, the Fire) should dominate — especially since most of KC’s losses came from their defense. Appropriately, the Fire pounced for two quick scores, so that fits into a nice, logical narrative, right?

Except the rest of the game didn’t play that way. Kansas dominated. Chicago was lucky not to give up an immediate goal when Dom Dwyer hit the post. Throughout the match, Sporting had more possession and posed a continuous threat to even the score. As Brian Battle pointed out at halftime, while helming the live tweets from @OTFSoccer’s twitter account, 2-0 was the score at the break against RSL too, and for that matter, the score after 72 minutes. The Men in Red were more than capable of blowing their lead.

It’s a puzzling predicament that the Fire seem unable to lock things down, and it renders me unable to even celebrate a goal because I know an answer is coming. It makes watching a Fire match more like watching basketball or arena football (or the Bears last year—hey-o!), where individual moments of offensive triumph are so common and reciprocated as to be rendered numbingly meaningless. Sure, a b-ball three-pointer is terrific and exciting, but never decisive (unless it’s at the very death). Whenever the Fire score, I naturally turn to the other goal to see if the opponent will drive the paint for two, or answer with another deep trey.

Despite all that, though, the Men in Red held a clean sheet in their hands at halftime, and despite all optimism to the contrary, it wouldn’t last. The turning point was a man being sent off—one of Kansas City’s.

Young Palmer-Brown, who was in over his head filling in for World Cupper Matt Besler and injured MLS All-Star Aurelien Collin, filled the role of designated foul machine most of the match, received his second yellow card in the 64th minute, and ended his MLS debut early. While he packs a ton of potential, he was by his lonesome at center back and was out-classed.

I can’t help but feel for the kid. He should never have been in this game, and perhaps suffered a tremendous hit to his confidence. Peter Vermes may have failed him by throwing him into the Fire. Still, there’s nowhere for the kid to go but up.

And, strangely, after his exit Kansas City became even more dominant. They pulled one back from a set-piece breakdown (which shall henceforth be known as a “patented Chicago Fire set-f#$%@&*-piece breakdown”), and gave us all more heartburn than we needed on the day. 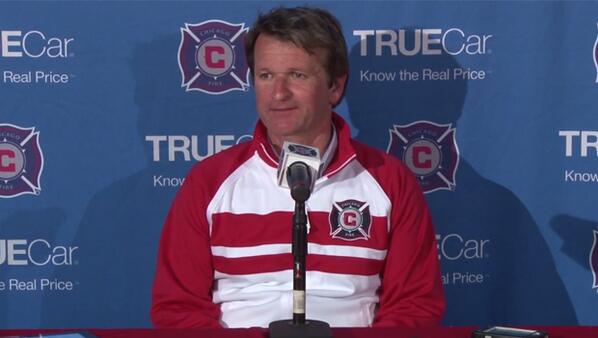 One more of those breakdowns and the boss wouldn’t be smiling… (photo: chicago-fire.com)

But, Chicago won. They pulled it out and held on. Folks can complain all they like about a World Cup-weakened KC side, but you can only play the guys in front of you. Still, this win felt a little hollow.

If a full strength Fire only barely scrapes by a side missing a significant amount of regulars, including some of the best players in the league, will any success Yallop and company have in coming weeks imply it’s all just a World Cup talent-inflation bubble?  Or, will it be the confidence-boosting, springboard the boys use to buy breathing space while problems work themselves out?

Or, to draw another oppositely speculative conclusion: Does the lack of drop-off with national team players missing mean the cream of MLS isn’t quite as high-rising above other players as the popular narrative implies? Certainly, this is something all those guys on minimum wage should be asking.

Turning back to the match of the day, though, all congratulations to the Fire men for pulling it out. They should dispel the doom and gloom and celebrate the win. After all, losing stinks too much not to enjoy the triumphs.

Plus, a hearty congrats to Mr. Magee, now tied as the Chicago Fire’s number nine all-time scorer. Hard to imagine a player who could represent the club and the city better than The Magic One. Let’s keep those goals coming!

OTF’s Alex White is a Georgian-in-exile who’s fallen for the Windy City, and an Illinois attorney—but for the love of all that is Good, do not get your legal advice from something you saw once on the internet, including anything he says. Follow Alex for non-legal opinions @A1exWhite or send him an email at alexander.mc.white@gmail.com