It is time. Time to get Delicious. (ceastudyabroadblog.com)

USMNT is gone, but the World Cup is not, and you still have to eat. Fortunately, Alex White has choked back the tears long enough to bring you the scoop on the most delicious of the eight remaining teams in the tournament…

I type this slowly and heavily, my fingers burdened by the weight of depression and black cloth. Yes, the Yanks are out.

But the tournament continues; the game remains delicious; and we indulge ourselves in ways we will not call grief-eating. Someone had the good foresight to schedule a holiday weekend for the World Cup quarterfinal round, and there remains a team in red, white, and blue for us to get behind.

Better still, they are scrappy underdogs who threw off a colonial yoke (Well, kinda. Fewer rockets…), and they come from our neck of the woods. As fellow CONCACAFers, their achievements reflect on us, and their successes can help build the case for more international respect–and a potential extra World Cup spot!–for the New Worlders north of the canal.

So after the beer and hot dogs and fireworks of July 4th, as the torch passes to Costa Rica, what better way to throw moral support their way than through our stomachs?

Start by serving up a breakfast of gallo pinto, as you rub the rockets’ red glare from your eyes. Or, for a state-side variation, keep the rice and sub out the black beans for black-eyed peas, call it Hoppin’ John, and wish the Ticos good luck.

For a full-fledged tailgate, Costa Rica has some fantastic finger-food options, with gallos (essentially what we would call small soft tacos), arreglados (meat sandwiches), and tamales.

While perhaps not best for the planet, the bright side of Costa Rican de-rain-forestation for cattle ranching is that the country is big on beef. Any leftover hamburgers from July 4 will magically become tortas de carne while you root for the Ticos.

As you might expect from a country with two major coasts, fish is a common part of the diet. Unfortunately for Costa Ricans the more expensive sea-dwelling creatures, like lobster and shrimp, are more valuable as exports. Still, there are plenty of fish in the sea, so find your favorite white fish for a ceviche.

For side dishes, without question the most prominent is rice and beans. If you want a bit more variety, you can deep fry plantains left over from the Ghana tailgate or root around for the many types of small dishes, or boquitas, commonly served. 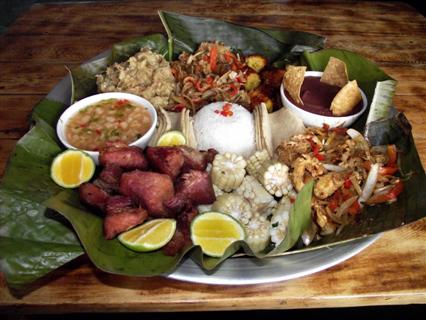 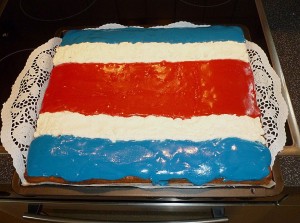 Yes, there is a cake under there (chefkoch.de)

For beverages, there are as many fruit options as you might expect from a rain forest, with green coconuts being an especially tasty choice, so mixed drinks may be the order of the day. The national drink of Costa Rica is guaro – made from sugar cane, so effectively a type of rum – was nationalized to curb illegal production. So it is the nation’s drink in a more literal sense than usual.

If you can’t track down any guaro, look for rums like Centenario. After all, you probably had plenty of beer on the 4th… 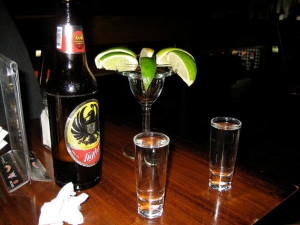 What’s that? You didn’t? Well, pickings may be slim for Costa Rican beers. Those that you do see have a distinctly germanic ring to them (Think “Bavaria”, “Pilsen”, “Bremen”, and “Kaiser”: a remnant of a German immigrant wave in the coffee boom of the mid-1800s). That’s not to say those are all the beers in the land; in fact, others are more highly rated. 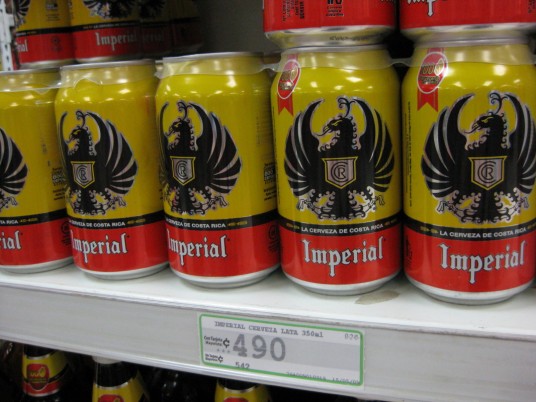 They play their football in an Italian style, and like their beer German with an English name: Costa Rica invented globalization. (platoputas.com)

Whatever you drink, raise your glass with a toast to the Ticos, who have already blazed a few major capitals of Europe, and keep the holiday weekend color scheme going to see if a (Central) American red, white, and blue-clad bunch can conquer the Oranje and keep the dream alive.

Get more of the Delicious Game, and the rest of our World Cup coverage

Alex White is in desperate need of a salad. Please send low cholesterol thoughts to @A1exWhite