Yes, the hosts came through, but it seems like it may have been at too high a price. Meanwhile, the metronomic Germans march on, and their path just got a whole lot easier. Let’s dive in…

Because the problems Germany had against Algeria, while not as numerous, were still there. They were better, by a touch. But their paceless backline was still playing a ridiculously high line and left plenty of space behind. The French only found this intermittently and their finishing was woeful. When it wasn’t, Neuer was there. There was hardly any urgency. Why was Giroud only brought on with five minutes to go? Valbuena was mooted. Benzema only had half chances.

As for the Hun, they’re not exactly wowing anyone. Their ruthlessness is in their efficiency I guess. Give Kroos enough freekicks he’ll make you pay. Muller will eventually find some space. And now that Brazil has been seriously handcuffed, without their talisman and their captain, they can just sort of roll into the Final.

This felt like another time when I would get to write about Jose Pekerman once again getting afraid of his own shadow and throttling back a swashbuckling, adventurous side to their destruction just like 2006.

For four games Colombia were the tournament’s entertainers and darlings, smiling at every challenge and dancing through it. But today they were just tentative for at least the game’s first hour, and by then it was just about too late. Perhaps they were afraid of a Brazilian counter. Perhaps Pekerman feared a yellow wave that never really came. Brazil were better than they’ve been, but that doesn’t mean they were in the same neighborhood as dominant.

It felt like all of Colombia’s attacks stemmed from James being able to beat two or three guys and then create to the one striker ahead of him – Teo. There weren’t any of the Colombian waves we had become accustomed to seeing roll forward.

But this game will be remembered for Zuniga’s “challenge” on Neymar that will keep the star out of the rest of the tournament and leave Brazil’s attack seriously dulled.

To be honest, after it happened I didn’t even remember it. Seemed innocuous enough. Upon replays it’s pretty clear Zuniga didn’t have much of a mind for the ball. This appeared to be a kicking for the sake of a kicking, though I doubt he intended for any kind of injury like this.

It’s just a shame. That’s all you can say. You don’t want to see the world’s best players missing out on the game’s biggest stage.

But on the field, Brazil shouldn’t be so hamstrung by the absence of one player, if indeed they are the power they claim to be. Yet, without a real striker, it’s hard to see how they make up for it. Hernanes coming in to play opposite Hulk, with Fred in between? Doesn’t sound imposing, does it?

Brazil’s strength has been their central defenders, who both scored today. But they’ll be without Silva now for a ridiculous yellow card. Dante isn’t the worst replacement in the world. Neither is Maxwell. But neither is Silva.

Brazil has been a lot like Germany: functional enough to keep getting through without turning on the neon lights. Somehow apt they’ll meet each other next. But after three semifinal appearances, this is where it feels like the Germans break through.

It wasn’t that sort of game, but it also kinda was
(o.canada.com)

Player Of the Day

Sideshow Bob Luiz. Brilliant goal, brilliant in defense, which is not something we usually write about him. 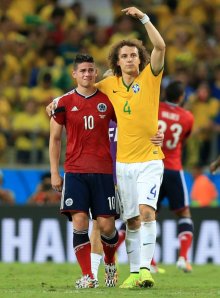 Magnanimous in victory, too (whoateallthepies.tv)

Only a few days left, but we’ve got your daily previews and reviews of the World Cup

When he’s not bringing you your daily Cup check, Sam Fels is @RealFansProgram and @CubsIvyDrip. Follow him. Or read him: TheCommittedIndian.com or theivydrip.wordpress.com or right here.