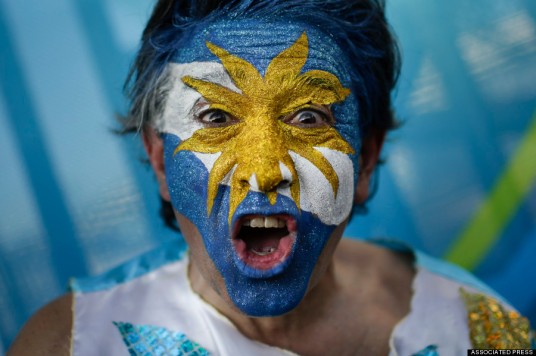 Wait, I thought Uruguay was out? (huffingtonpost.com)

The tournament rules demand someone step forward to play Germany at the weekend, so we’re going to have to see things through – despite the temptation (too strong to resist in some cases) to cast the Germans as the most perfect incarnation of football since…you know, the last one…and the one before that.

Fortunately for the Germans, zeitgeist is a word they invented, so they have some inherent immunity to its charms. They will likely not get too carried away.

Every team in the semifinals had to work harder than expected to get here. The evidence of the first game is the work was too much for some.

There is no reason to believe the second match in this round will be as one-sided as the first, but no one expected Brazil to simply fold up like a deckchair at the first application of pressure.

As with Germany’s thumping of the World Cup hosts, the surprise in the next semifinal will not be if one team or the other wins – they each have their merits and their flaws – but if one completely dismantles the other.

There is pressure for both sides: Argentina is carrying Messi’s destiny and CONMEBOL’s dignity (an all-UEFA final in Brazil? Are you kidding?); the Netherlands must confront a history of getting close, but not close enough.

And whichever teams wins gets the privilege of wrestling with a much bigger problem in the next game. The second semifinal is the battle to see who gets to be the favorite to lose the final. 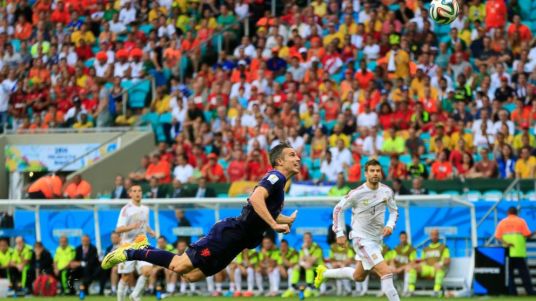 Watching a Dutchman dive is not always infuriating (abcnews.go.com)

The Dutch have a similar record, without the part about actually winning the tournament. They have been to the semifinals four times previously, and they have trotted on to the final on three of those occasions – ’74, ’78 and 2010. Only at France ’98 did they stumble at this stage.

This tournament is an interesting opportunity for the Netherlands to heal some old psychological wounds. They lost the ’74 final to (West) Germany in (West) Germany, and followed up by losing the ’78 title game to Argentina in Argentina.

If they play their cards right, they have back-to-back revenge matches on neutral ground lined up.

Of course, you don’t get to win games because it makes for a nice story – as Brazil will tell you.

We have the Netherlands to thank for drubbing the Spanish at the start of the tournament, opening up the draw a little – for the Dutch, as it turned out.

The big news out of the Dutch camp is Robin van Persie has a dicky tummy and has not been training with the team. If he’s fit, he plays. Hell, this is Louis van Gaal’s team – if van Persie is scarcely able to walk, van Gaal would start him and sub him after a minute for a toddler from the crowd if he thought it would unsettle the opponent.

One bit of pre-penalty shootout chicanery and van Gaal has turned into the smartest man in football.

The Dutch have looked most comfortable in this tournament against opponents who were perceived to be able to match or beat them: Spain (beaten 5-2) and Chile (beaten 2-0). Against teams they were expected to beat, they’ve struggled: they let Australia get a little wild in the group stage; needed a hand from the referee to put Mexico away; and couldn’t get the ball in the net against Costa Rica.

This could be interpreted as the work of a team that is best prepared for its biggest games. In which case, watch out Argentina: this is the Netherlands’ biggest game to date.

Nigel de Jong was supposed to be out for the rest of the tournament, but is allegedly a possible starter again. It would be a greater gamble than switching ‘keepers for penalties: starting a man of uncertain fitness to target a man, Leo Messi, who routinely befuddles the best in the world.

And the Dutch can get by without de Jong, and van Persie. This team has leaned heavily on Arjen Robben, who has persistently been a threat, and has dominated the Oranje‘s work in the final third for the last two games.

But Robben’s role for the Dutch doesn’t really compare to Lionel Messi’s for Argentina. He’s scored four out of his team’s seven goals at this tournament. He set up Angel Di Maria for the winner that took La Albiceleste past a stubborn Switzerland.

He didn’t have a huge amount to do with Gonzalo Higuain’s goal against Belgium in the quarterfinal, which is why that goal – and match – suggests Argentina may be starting to conjure the worst-case scenario for their opponents: you can try to stop Messi, you may even succeed, but there are plenty of other talents in the team who can turn a game. 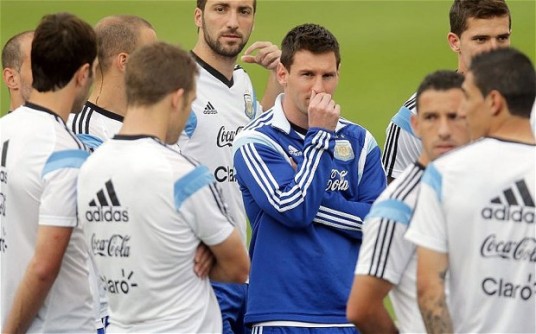 Yeah, we’re talking about you again.(telegraph.co.uk)

One of those talents, Di Maria, is out for this game – and quite likely the final, if Argentina makes it. Such is the nature of this squad, the idea of replacing him with a fit-again Sergio Aguero counts as a disappointment.

In part, this is because Aguero hasn’t played particularly well and the team seems to have been better off without him since he got injured. Di Maria has been able to take on a larger role; everything has been OK.

Alejandro Sabella has options: he is expected to start Enzo Perez in Di Maria’s stead, with Aguero as an off-the-bench option. This is a true embarrassment of riches: your Champions League winning winger goes down, and you’re puzzling over the Portuguese Primeira Liga’s player of the year or the English Premier League champion’s top scorer in all competitions.

And your opponents will still be focused on stopping one guy on your team – and he’s none of those three.

This, plus the fact it is the only CONMEBOL team left in the competition and conventional wisdom tells us European teams don’t win World Cups in South America, makes Argentina favorite for this game.

Yes, the defense looks rickety. Yes, Sergio Romero is the back-up for his club, Monaco, to Croatia’s second-choice national team ‘keeper. But La Albiceleste has not conceded a goal in the knockout rounds, and only Nigeria has managed to really make Argentina look vulnerable at the back.

You can boil this game down to Robben vs. Messi, or van Gaal vs. Messi, or history vs. Messi (this is likely his one and only chance to win a World Cup on South American soil).

Indeed, this World Cup could be reduced to to Messi vs. Europe: Argentina has beaten Switzerland and Belgium in the knockout rounds, and must now beat the Netherlands for the privilege of trying to beat Germany.

But this match is really about two solid but uninspiring defenses, and how they fare against two of the best playmakers in the world. 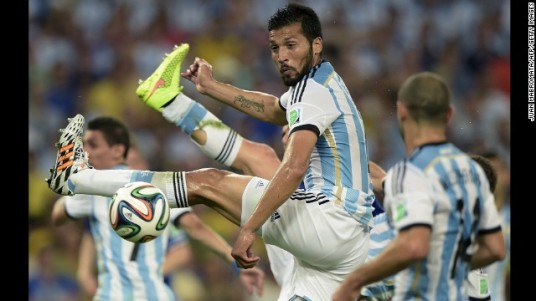 Always comes down to the defense, doesn’t it? (edition.cnn.com)