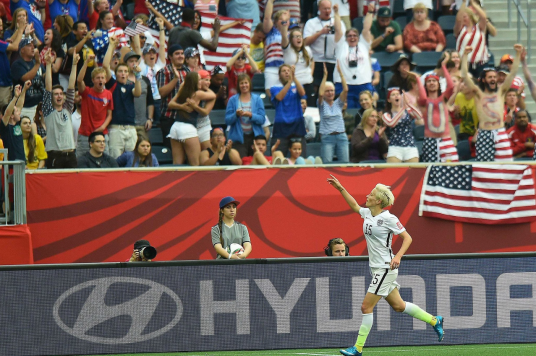 Correspondent Alex Unzueta recaps the U.S. Women’s National Team’s uninspired, but effective win over the The Matildas from Down Unda.

The U.S. Women’s National Team opened up their World Cup play with a win against Australia on Monday evening. After a shaky start, the U.S. dialed in with some help from Megan Rapinoe, who scored twice and Chicago Red Star’s striker, Christen Press who added a goal as well. With a surprisingly tough 3-1 win, the U.S. sits first in their group.

The United States is a favorite to win the tournament. After falling short in a penalty shootout to Japan back in 2011, the only expectation this year is lifting the cup on July 5th…

The U.S. was expected to roll through Australia with ease in their opening match. That certainly wasn’t the case as the Aussie’s came out with everything, nearly scoring on the U.S. in the opening minutes. A nervy start from the United States allowed Australia to attack, however, U.S. goalkeeper Hope Solo showed poise and experience as she made two huge saves to keep Australia scoreless the first 20 minutes.

Seattle Reign midfielder Megan Rapinoe opened the scoring in the 12th minute after her shot from outside the eighteen was deflected by a defender and beat Australian keeper Melissa Barbieri. The rest of the half was dominated by Australia. They responded superbly after going down a goal early in the match. The backline of the U.S. allowed too many connected passes around the box and paid for it in the 27th minute thanks to Australian captain Lisa De Vanna.

After an unconvincing first half, the U.S. proved why they are ranked second in the world. In her first World Cup, Christen Press scored on a great cross from Sydney Leroux in the 61st minute. Leroux beat out an Australian defender down the left line and put a ball in on the ground towards Press, who finished it with her right foot to the far post. The goal marked the game’s turning point,  as the USWNT took determined the flow of the game after the go-ahead score.

Rapinoe got her brace in the 78th minute, serving as an insurance goal. A great individual run down the left line put her 1v1 with a defender. The crafty Rapinoe created some separation and took a left-footed shot low and towards the second post beating the keeper. As expected, manager Jillian Ellis entered Alex Morgan in the match late in order to get the recovering striker into the mix of things again. Her last competitive match was back in April before picking up a knee injury.

Worthy of noting: Both Rapinoe and Lauren Holiday picked up yellow cards during the match. Tournament rules state that two yellow cards before a quarterfinal match will result in a one game suspension, so it’s certainly something to keep an eye on. Additionally, Sweden and Nigeria, who are the other two teams in Group D along with the U.S. and Australia ended in a thrilling draw.  The U.S. sits  atop of the table, but the Sweden-Nigeria tie assures a highly competitive Group D games in the next few days as all four teams still have an opportunity to reach the knockout round going into this week’s matches.

The United States’ next matchup is against Sweden on June 12th in Winnipeg. The game can be watched on Fox Sports 1.

Alex Unzueta is a Chicago native studying Journalism at Benedictine University while also playing on the men’s soccer team. A passionate yet agonizing Fire fan. His tweets are taken too seriously. Give him a follow @GolazoDeUnzi.