Who Are The Best Players & Best Values in MLS Free Agency, Re-Entry

Evaluating players is a messy thing.  With MLS’s first Free Agency class now available for purchase and MLS’s yearly Re-Entry Round 2 Draft beginning tomorrow (Thursday, 12/17), it is worth looking at who’s available… and who’s worth being available.

I’m using the same data I’ve used previously to look at player performance: The OPTA-based Squawka rating system and MLS Player Salary information. (Note: I am not including goalkeepers in this report because backup goal keeper performance data is incomplete.)

Based on their average per-game Squawka performance over the last two seasons here are the best players available through Free Agency or through the Re-Entry draft:

By itself, this ranking can be misleading.  What you don’t see here are the ages and relative health of the player which will greatly affect a team’s interest in a long term contract. Also missing (and a huge part of building a team) is what the player salary will be after contract negotiations.

Based on Sounder at Heart’s Free Agency salary “ceilings” and the average renegotiation of Re-Entry salaries, below are the Top 30 Value Players. This was calculated by the indexed difference between their Sqwakwa score and indexed MLS Salary estimation:

The “best value” list above assumes that a Free Agent will receive their MLS max-allowed salary increase. Based on previous years contract renegotiations,  players with near league-minimum salaries received a bump of ~20% and  Re-Entry Draftee’s contracts over $100k will reduce by ~20%.

There is a huge difference between player performance and salary between when comparing Free Agents and Re-Entrants. It’s best represented in a scatter graph.  I’ve broken it up by position so it’s more legible, and included my adjusted value ranking as well. 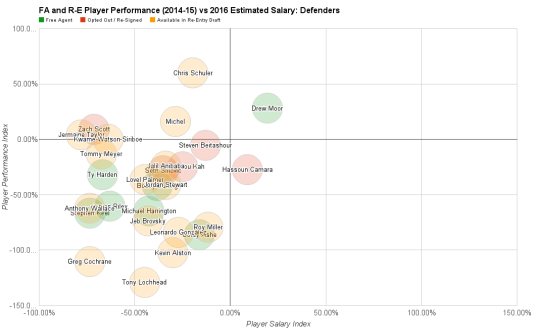 You’ll notice that only two of the MLS defenders available for acquisition were making above the league median salary and only one of them was performing at an above average rate. The most-desirable players on any of these scatter graphs are in the Top-Left i.e over-performing, underpaid players.  Here are all the defenders available that played above average soccer in 2014-2015: 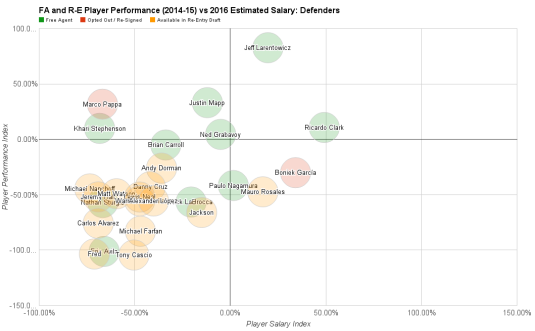 Note the difference in color here: no yellow (players whose options were declined) appearing above the median performance line.  Simply put: If you play above average soccer as a midfielder you will always have a place on an MLS team.   There are two red players here — players that have already re-signed, retired, or been traded (or have opted out of the Re-Entry process because one of those things will be happening).  The green guys are your Free Agents. Notice Ricardo Clark here, who played well recently, but is also considerably more expensive than a lot of other options at midfield. Here are all the midfielders available that played above average soccer in 2014-2015: 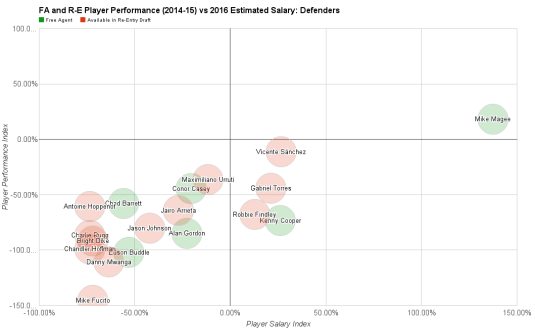 If you ever wondered how valued forwards are in MLS, here is your answer: Only one striker in the entire league that performed above average was made available this offseason.  That one striker is a very expensive Mike Magee.  Magee, with 2015 guaranteed salary of $467k this year, will have a Free Agency ceiling of $537k.  With his age, and moderately above-average performance, he’s just not a good value.  To find value at Forward we have to look towards players that met or exceeded their (often overpriced) salaries.  That includes:

If you’re curious… here’s a scatter graph of all the 2015 Free Agents: 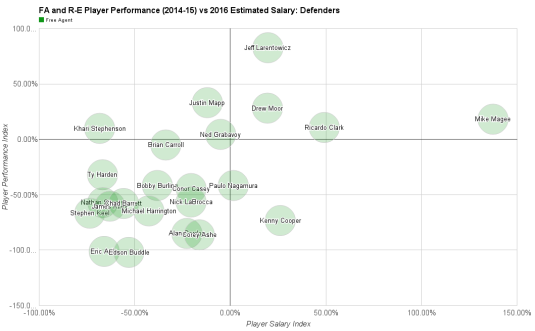 One thought on “Who Are The Best Players & Best Values in MLS Free Agency, Re-Entry”