Give us fuel, give us Fire, give us depth which we desire. (photo via YoDesportes)

Preseason has started for your 2016 Chicago Fire. Prior to tomorrow’s friendly against fellow basement-buddy Philadelphia Union, we wanted to look at the depth chart battles going on.

Because a lot of the team’s existing and big-purchase talent have just joined camp, the convincing (if tepid) 3-0 win over the University of South Florida on Saturday is not really going to help anyone figure out what Chicago will ultimately look and play like.

The one thing it does allow us to do is compare players “apples-to-apples,” as Fire trotted out a nearly full squad half-time swap with 10 new players subbed into a 4-2-3-1 base formation. If you’re interested, here are the match highlights:

Alex Says: Lampson definitely did look shaky a couple times during his half. Of course, the two keepers competed for a backup position, being that Johnson will be the starter come opening day.

Brian Says: With a 1-save shutout we can’t really make a call here on who really had the better showing. I’d have to go with McLain here because of a few nail-biters Lampson had when passing out from the back, and a drop-kick that sailed way out of bounds in the first half.

Alex Says: Pineda will not be available for the season, but it sure looked like he would be ready to step in back there. Doody still strikes me better playing wider because of his size. Keller was solid with his minutes.

Alex Says: Harrington looked a bit limited in his positioning at times, unlike Calistri on the other side. I think part of that is because Accam was single-handedly attacking that left wing.

Brian Says: Harrington looked cagey, but a little slow — understandable from a week’s worth of two-a-days. Based on Pauno’s second-half fist bump with Maher, the Head Coach was pleased with his output, but he’s just visiting from Saint Louis FC. Vincent is the clear Number One here with Harrington as the veteran swing-back like Lovell Palmer might have been in earlier seasons. Doody, despite lining up as a CB for this friendly, is also a pure stay-at-home left back.

Alex Says: Calistri, the Northwestern product, did extremely well playing out of his natural forward position. He did show his forward characteristics at times, pairing up with trialist Arturo Alvarez nicely on the right wing. He looked very promising when joining the attacks. It also shows that his fitness level is high. Keller wasn’t as involved as I’d liked for him to be. The third round draft pick seemed a bit nervous, which is understandable in his first pro match. A few of his passes were shaky, one switch of play in particular. The better Vincent of the day definitely goes to the goalscorer, Vincent Mitchell.

Brian Says: Forward Calistri didn’t take many chances at right back, but he did look resolute at the position; making the easy (read: smart) pass most of the time, connecting well with Alvarez in the attacking half, and threading a promising pass through to Stephens that would’ve developed into a scoring chance but it skipped a yard too far past the midfielder.

Alex Says: Cocis took a very defensive position in the first half. Didn’t really push up as much as he could have. He left that more for Stephens, whose work rate continues to impress. LaBrocca looked like the experienced MLS veteran he is. Cool and calm on the ball, he looks like he’ll fit right in that midfield role throughout the season with Cocis and Polster. The homegrown signing, Conner, had a quiet game. Most of his passes were negative. The few he had going forward were stolen. This could have just been a ‘play-it-safe’ approach he took to the match. Conner left us wanting to see more of him.

Brian Says: No one told Michael Stephens that preseason has just started, because he looked like he could keep running forever. In other words — like a real #8. Mikey made up distance well between the attack and the defensive but it would’ve been nice to see some more dynamism between him and Shipp. If Stephens looked like the box-to-boxer, LaBrocca definitely looked more the part of a #6 than Cocis though the position is clearly Polster’s to lose.

Alex Says: Although there weren’t many flashy “Shipp-like” plays we see every now and then, it was good to see him connecting well with Gilberto and David Accam. If the Fire are going to have a strong offensive attack, it’s going to be through these three. Harry looked to establish possession most of the half, which makes sense in the team’s first match of the year. He did have one really nice move where he faked a cross and cut in on a defender, sending him diving in for the ball foolishly. Hope to see a lot of that this year.

OK, it’s safe to say that Collin has a knack for serving up chances on a silver platter. We saw it in the five minutes he got last year on his MLS debut against Columbus, and we saw it again with a beauty of a ball to Mitchell. The kid can pass, period. Hope to see him get more minutes this year.

Brian Says: It really is a make-it-or-break-it type year for young (*middle-aged*) Harry. This wasn’t exactly a great showing for Our Creative (though he got an assist on the second goal), but we can’t expect everything to gel after a week. There just weren’t that many touches to be had in a fairly pallid practice game. Fernandez, on the other hand, had the play of the game — a high-arched pass to the foot of Mitchell, who stopped the ball dead and stroked a right side-footed shot in with ease. Noyce.

Alex Says: The El Salvadorian international was one of the liveliest players of the match. Alvarez really proved to Paunovic that he should at the very least be in the team’s 18 every week. (Not that the Fire have hundreds of players on the roster to pick from). There were a few moments where he and Gilberto combined very well. This guy is exciting.

Brian Says: Alvarez played his way onto the roster. He was active, he wanted to make shit happen, and he opened the scoring. The right side is the obvious weakness for the team (Hey Nyarko), so sign this man up. Morrell, it must be said, looked very lively in the sod-slush second half.

Alex Says: Accam was easily the best player of the 2015 season. He picked up Saturday right where he left off last year. His first touch of the match was an aggressive one, going straight at his defender with a cheeky flick over the top. The USF defenders were no match for Accam in the half. Heck, half the MLS defenders that Accam went up against last year were no match for him. If the rest of the attackers can learn to move off the ball when Accam dribbles and clean up for him, the Fire will see a lot of attacking success. He continues to dazzle. For the most part, Vincent Mitchell looked comfortable. Aside from a few questionable passes, his runs were solid and got on the end of a few Collin Fernandez services, one leading to a goal. Another player we’d like to see a bit more of.

Brian Says: Accam is Pennywise the Clown in the dreams of MLS right backs. So fast, so aggressive, technically gifted and playing a surprisingly physical game against the smallish USF side. Fire F.O. are already counting their Allocation Dollars when he gets sold to Europe after this season (or maybe this summer). I have to mention again how much I enjoyed how calmly Mitchell put his away… you can’t coach that kind of poise.

Alex Says: Gilberto was a great addition last season, but it took him a while to find himself on the field. Things are looking different in 2016. He was involved in both first half goals. Gilberto was extremely active, had some opportunities for himself as well. The nice thing to see was that chances were created. Last year’s offense was sad to say the least, so it was a positive to see Gilberto involved in a number of chances. Solid showing for the striker, looked like a true #9 out there. As much as I want to like Igbo’s play, something is just missing. His high work rate is there, but it seems as though he lacks that final play. His passes were a bit off and he wasn’t as involved in the attack as Gilberto was during the first half. 7 goals last year in 31 matches isn’t exactly DP material. I can see why that changed.

Brian Says: Gilberto took a lot of heat before even playing a game last year when he came in as the Participation Ribbon Designated Player when First Prize went to Montreal. What we’ve seen since, when he’s healthy, has been tremendous. His work ethic is that of five Juan Luis Anongonos. Fire (and Fire fans) must be happy to have a clear starting striker in house. Igboananike did fine, though nothing really sticks out. Suffice to say: Igbo is a shoe-in “second striker” in a formation that features one striker.

So, here’s our 11 for now (understanding that new guys are in camp, and some new trialists as well): 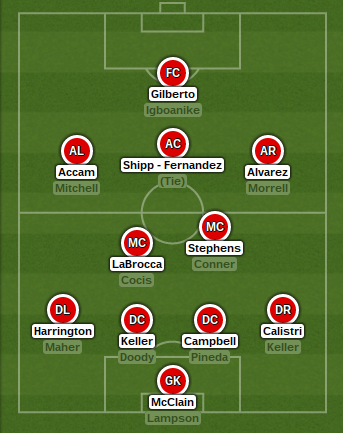 Who fared better on Saturday, by position.